Split – Vis (6-4-19)
Today I am leaving Split for the Island of Vis, Croatia. I learned that Vis is the most remote, permanent inhabited island in Croatia. Saying that, it takes only a bit more than 2 hours to reach Vis by big (and slow) vessel. Leaving Split by this ferry is an experience on it’s own. Sailing off and turning the vessel in the harbour, is a slow process which gives you enough time to enjoy the beautiful panoramic view over the city, especially from the upper decks.
The ferry passes the narrow straight between the islands of Solta and Brac and then passes Hvar island on the way to Vis. The approach of Vis island is beautiful. The town of Vis is situated in a horseshoe shaped bay, with quiet waters and a beautiful water front, with a mountainous background. As the cars on this car ferry drove in at the front site, the ship needs to make a turn and reverse towards the dock (in order to avoid that the motorists have to reverse their cars out of the ship). This process is also an experience in this small and gorgeous looking bay.
Vis has 2 towns of significance; Vis Town and Komiza. My destination for today and tomorrow is Komiza, on the other side of the island. Fortunately buses on this island are serving the ferry, so i didn’t have to walk far, or wait long, to get to Komiza. The town of Komiza is divided from the rest of the island by a mountain range called Hum, with a road full of hairpin turns, where you will be treated with a beautiful view over Komiza and its bay.
In a way the approach to, and the remoteness of, this town reminds me of the town of Pollara on the island of Salina, one of the Aeolean islands. The scenery is less dramatic, but the fact that it is on the far site of the island and, apart from 2 winding roads, almost cut off from the rest of the island makes the comparison.
Especially with todays sunny weather this town looks marvelous! Very Idyllic, with a lovely waterfront, old houses(some right at the water‘s edge) clear water and small boats spread out in the small harbour. From Komiza you can hike up to the church of Blaz (altitude 239 meters). From this track you get a fantastic view over Komiza and its bay.

Behind the church you can continue to the deserted village of Dragodid. You literally cross this set of abandoned houses and sheds to follow the track down to, from where you have a view to the 2 tiny islands of Barjak, before turning back to Komiza. The whole trail is easily accessible and takes about 2 hours (without stops).

At this time of the year, there are only two (Italian) restaurants open in Komiza. Both good, and nice places to watch the sunset. But unfortunately this beautiful sky tells us something: Rain tomorrow 🙁 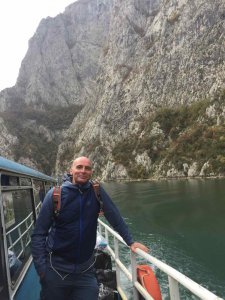 Ashy’s Planet is created by me, Aschwin Zuidberg from the Netherlands. After a lot of intercontinental travelling I decided to discover my own continent, Europe, more and more. I was, and still am, so surprised by the beauty and diversity of this continent, that i realised i don’t need to travel far to see amazing places. I especially love southern Europe and Southeast Europe, south of the Alps and along the Mediterranean (& Adriatic) Sea. With a mixture of beautiful nature, in-your-face history (like castles, towers & structures), lovely villages, calm turquoise waters, mild weather and good food, it’s not easy to dislike these countries. As an individual (and mostly solo) traveller I always try to avoid the crowds. So no package- or all-inn holidays, but booking everything apart and planning and organising my trips along the way. I set up this website to share my passion for southern Europe with other travellers. Although almost all is beautiful, with Ashy’s Planet I want to share some absolute highlights with you. All pictures are taken by me or in front of me. Feel free to contact me if you have any questions, need some advise or just want to share something with me: info@ashysplanet.eu